To guard beforehand: conservation, the main activity of museums is a complex set of procedures to maintain and protect elements of specific interest, and to warn about their value and the consequences of their loss. It is an activity radically engaged with the future: it constantly reminds us of the possibility of future corruption, dismemberment and collapse.

It is in many ways a territorial practice: to warn off, to establish demarcations and to deter. ‘Terrere’: territory is a concept enveloped in notions of terror, fright, where the procedures to hold onto the elements that we value and that sustain our lives are made explicit.

Four large-scale Earth Observation images outline territories wrought by oil  in North America—from the Mississippi Delta cut across from oil, to the the fracking shale boom North-South axis, to the boreal forests of Canada dissected for oil prospecting, intersecting in Chicago  the complex supply chain constellated by refineries and pipelines.
‍
They outline a cross section  of oil in America.
They indicate the main elements for the complex negotiations to disentangle ourselves from oil and keep it in the ground.

To make oil a thing of the past and design an open future. 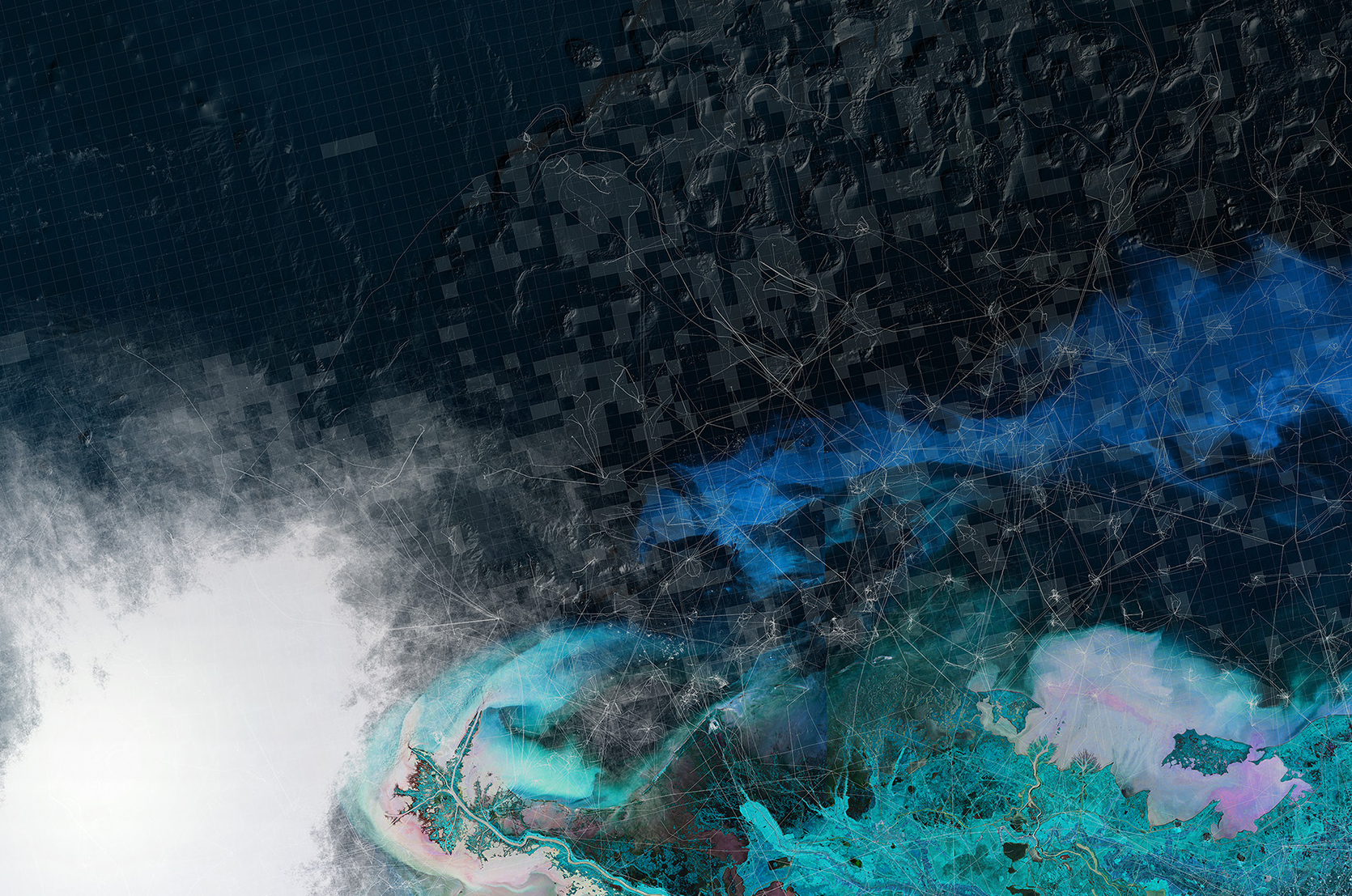 An ocean of oil

Oil marks in the ground and at sea are not only the results of spillages, extraction, pollution and environmental catastrophe. Oil is registered in ways that far exceed its murky and black direct physical impact.
‍
Brought down to earth, oil becomes a figure against a complex and non-contiguous background. Its coherence, what keeps it together, is registered and measured both geologically and in its multiple streams of influence.
‍
It is registered in the absence of its name from any international negotiation document on climate change, it is marked in the growing influence of oil companies on the global financial markets, it is registered in the direct access to policy makers, it is in the missing and banned photographs of the impact of the BP Deepwater Horizon disaster in the Gulf of Mexico, and it is traces are increasingly linked to absent research on its consequences.
‍
It is in the civic enthusiasms of modern architecture and its development goals. It is in the rapid urbanisation processes and it is in the growing corruption and violence that its extraction entails and facilitates, it is in the militarisation of global pipelines and sea supply lines and choke points, it is even registered directly in international law, with the extension of sovereign rights to mineral resources to submarine areas of  the continental shelf.
‍
From the intensification of agriculture in the Midwest, to the Dead Zone in the Watters of the Delta, the meter of this coherence needs to be assessed and re-evaluated in relation to the emerging knowledge event of climate change and the Anthropocene. 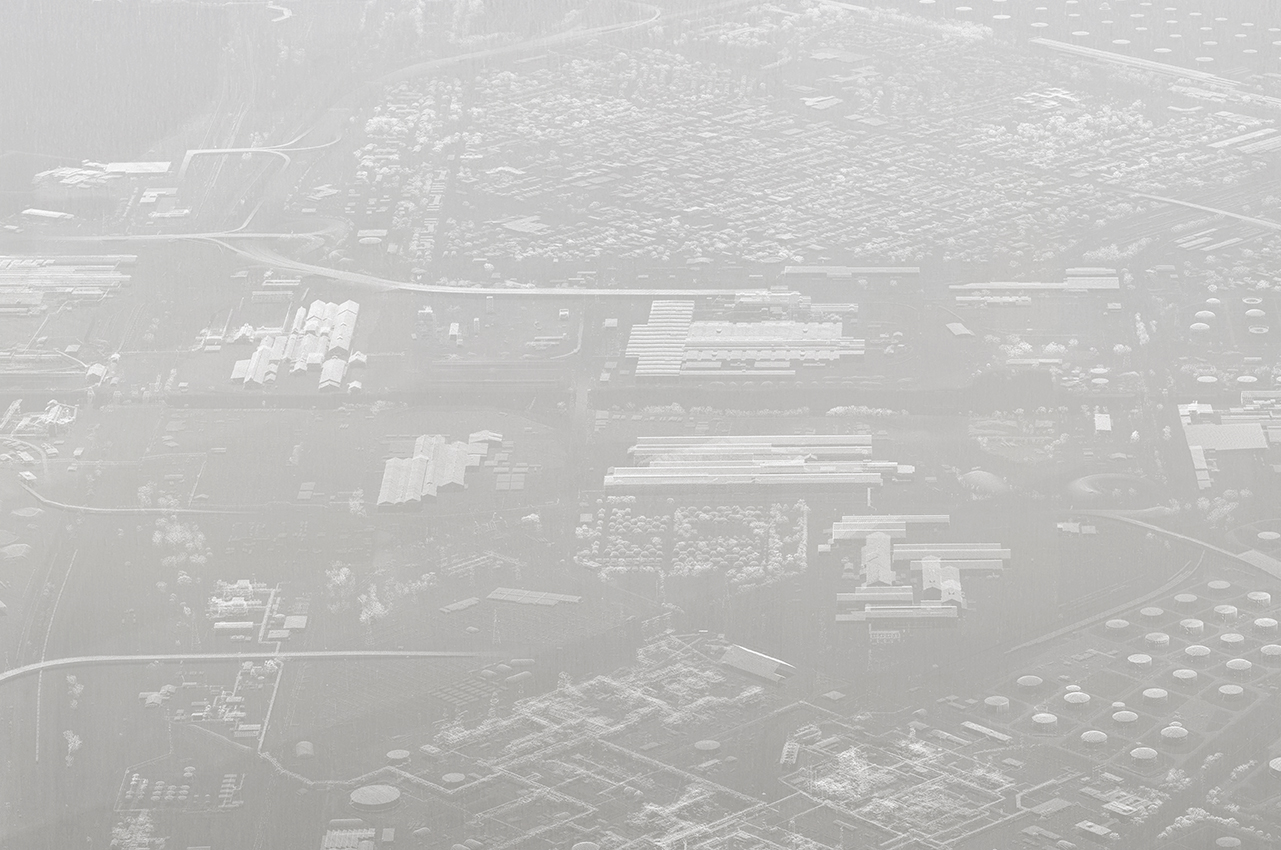 Refineries are a key component of the Anthropocene: they transform crude taken from the ground into complex fuels, chemical compounds and fertilisers through the Haber-Bosch process. Through vast pipelines, they transfer carbon stored deep into the ground into refuse of the technosphere: in the atmosphere, in the washout of rivers, in the oceans.
‍
The tipping points of past energy transitions all reverberated through an expanding frontier line. The energy transition equated a transition into a space where possibilities were augmented, including the possibility of destroying what was in the way: forms of life, environments, cultures, landscapes, economies. The new was always and systematically narrated as being better, larger, faster.

‍
The current energy transition, characterised by the shards of the spaces left behind from the previous impact waves of energy tipping points, is no longer a single and univocal vector of development and synchronised steps of connecting the world into a gigantic supply chain. The waves of this energy tipping point oscillate and multiply differences, they refract and brake: the waves of carbon fossil intensification, after having travelled around the deep surface of the Earth, are now showing impetus that is coming back at us from all sides. 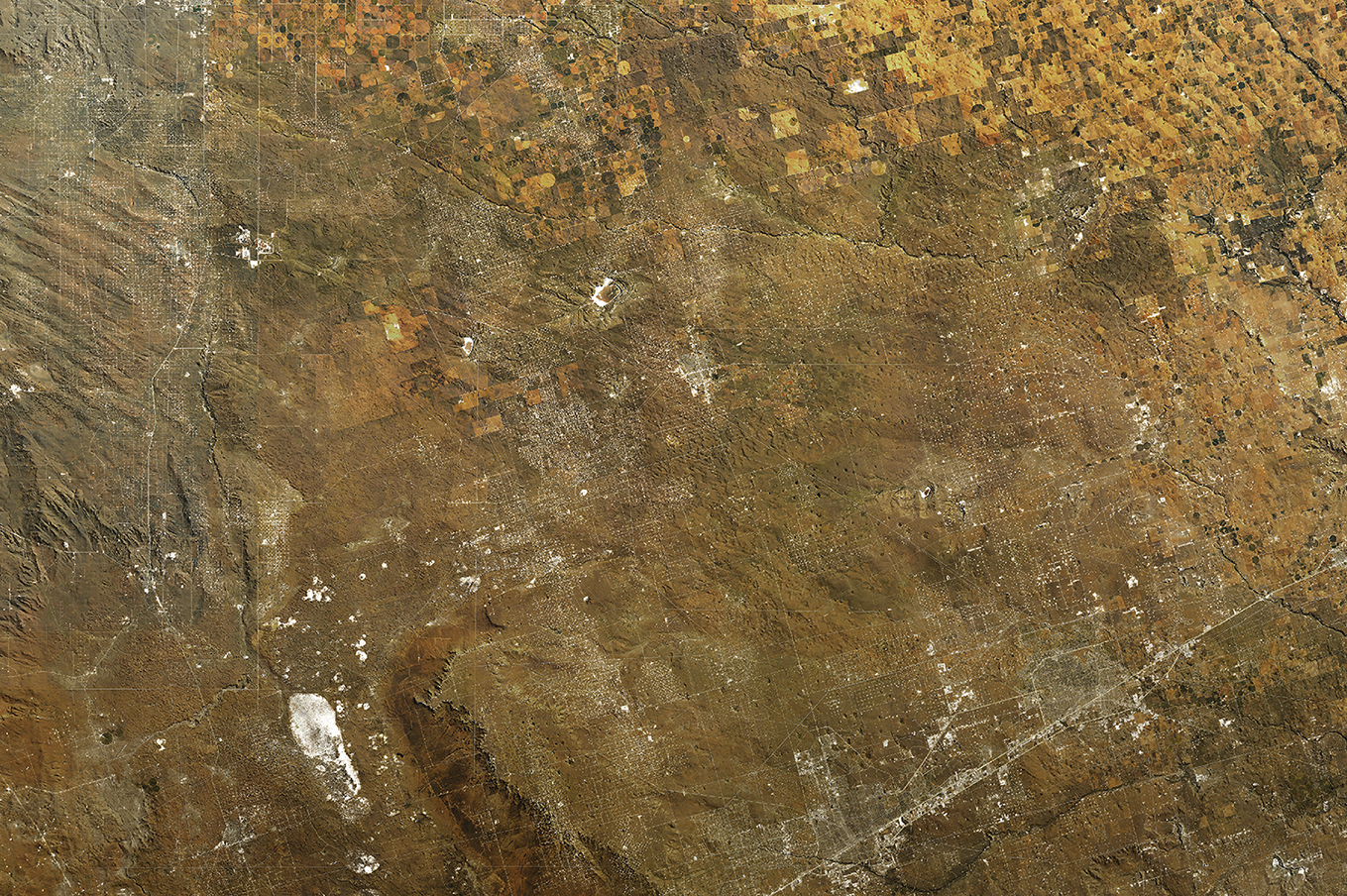 The recent American shale boom is a direct transformation of an entire material landscape, both above and below ground, as well as a human landscape directly linked to the more than 350 billion $ investments over the past decade, supporting hundred of thousand jobs.
‍
The development of shale fracking is a rapid burst in activities, or rather a bubble of unprecedented impulse and dimensions.
A Standard & Poor’s analysis in late September 2015 indicated that half of the US energy junk bonds are at risk of default, resonating with the events of 2008, which triggered the biggest financial crisis in history.
‍
The oil industry is a major risk, not only in terms of its impact on the Earth System, but primarily because of its deep and ramified connections
to the global financial system, with a dangerous proportion of its transactions related directly to oil-linked investments and funds. 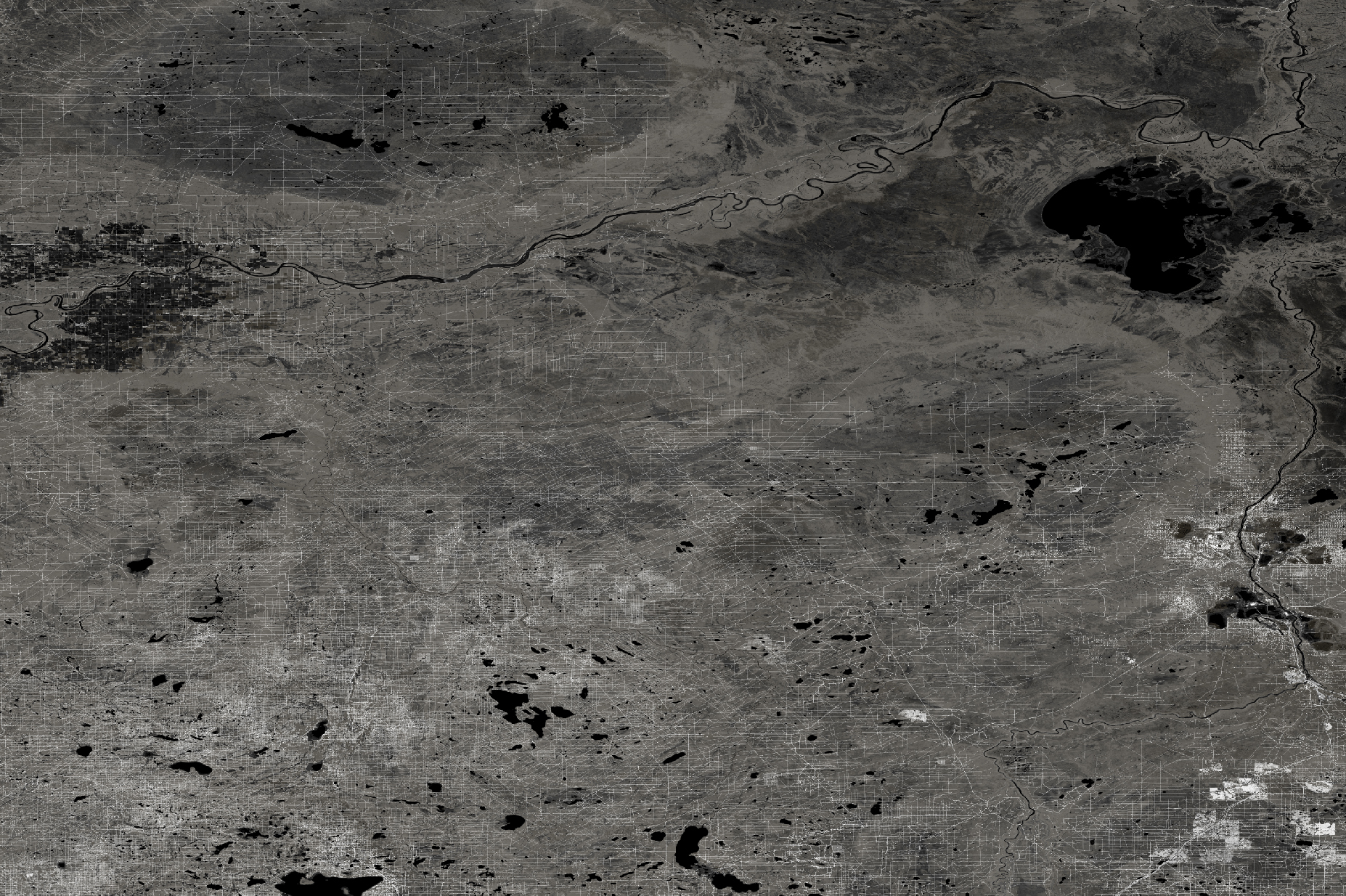 While the Athabasca tar sands in Alberta are the largest single industrial operation on the planet, they are only the most evident and immediate element of the vast pattern of destruction that is linked to the oil industry in Canada.
‍
Thousands of miles of lines are cut across the boreal forest to expose the ground to direct surveys in the search for oil and gas: seismic soundings that create complex reverberation maps.
‍
‍
This information is taken out of the public realm through complex intercontinental trade agreements, and removed from citizens, activists and researchers.
‍
The small width, large-scale continental grid of contemporary Canada is no longer a system of interconnection and links: it is a complicated and obscure system of invisibility and severance.